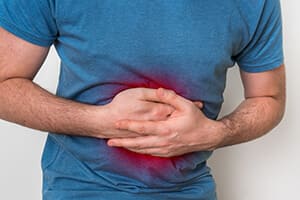 What is Crohn’s Disease? What is Irritable Bowel Syndrome?

Although similar in many respects, Crohn’s Disease and Irritable Bowel Syndrome (IBS) are two different medical conditions. Crohn’s Disease is a chronic inflammation of the intestines that causes ulcers to develop anywhere from the mouth to the anus. IBS is a disorder that affects the functioning of the gastrointestinal tract, but unlike Crohn’s Disease there are no changes to the structure of the tract.

The cause of Crohn’s Disease is still unknown. Recent research suggests that it is a bacteria-based infection, but as of yet, no definitive conclusion can be reached. Although a person’s diet can affect the nature and severity of the symptoms, diet is not responsible for the condition developing.

The causes of IBS are also not understood, but research points to a combination of any of the following conditions:

Who is at Risk?

Crohn’s Disease affects almost 2 million people in the U.S. While both men and women are equally at risk, people of European Jewish ancestry are 4 or 5 times more likely to develop the disease. The numbers of African Americans suffering from this condition is increasing as well.

Many people disregard IBS symptoms as merely indigestion and do not have the condition checked by a doctor. As a result, accurate figures on the numbers affected by IBS are available. However, studies indicate that 10 to 15% of the U.S. population may suffer from it. Women are twice as likely to suffer from IBS and the condition is more common in people below the age of 45.

The most common symptoms of Crohn’s Disease and IBS are bloating of the abdomen, abdominal pain and spasms, and constipation alternating with diarrhea. Loss of appetite, recurring fevers, rectal pain, rectal bleeding and night sweats are less common but not rare.

In the case of Crohn’s Disease, symptoms not related to the digestive tract are also possible. These include: inflammation of the iris of the eye, skin rashes, and arthritis. Because IBS is so often confused with simple indigestion in its early stages, occurrence of the symptoms at least three times a month in three months is a normal pre-condition for a diagnosis of IBS.