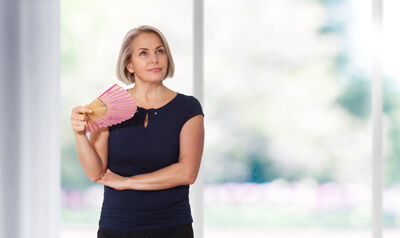 Menopause refers to the point when it’s been a year since the end of a woman’s menstrual cycle. Menopause is not an illness. It is a natural transition between two physiological phases of a woman’s life. The average age of menopause in women in the U.S. is 51.

The period of fluctuating hormones before periods end is referred to as perimenopause. Perimenopause typically occurs during a woman’s forties.

Menopause takes place due to the occurrence of a complex series of hormonal changes in a woman. A reduction in the number of functioning eggs in a woman’s ovaries is associated with the onset of menopause. As menopause approaches, the ovaries reduce their production of estrogen hormone drastically.

Estrogen impacts various parts of the body, including bone, heart, uterus, urinary system, brain, skin, and blood vessels. Many scientists believe that the loss of estrogen may be one of the critical factors responsible for menopause.

The most common symptom of menopause is hot flashes. About 75 percent of all perimenopausal women may experience hot flashes. A hot flash is usually a brief feeling of warmth that spreads across the body, and lasts anywhere between 30 seconds and a minute. Palpitations, flushed skin, and sweating may also occur along with hot flashes.

Other symptoms of perimenopause and menopause include:

Some symptoms may be associated with an increased risk of heart disease.

Hormone replacement therapy is believed to help a large number of women who may suffer adverse symptoms during perimenopause or after menopause. This therapy is used to improve the levels of estrogen hormone in the body, and sometimes it involves supplementation of both estrogen and progesterone hormones.

Both estrogen and progesterone are hormones that get produced by the ovaries. When the ovaries stop producing sufficient amounts of these hormones, which occurs typically during menopause, the hormone replacement therapy can help restore the necessary levels of estrogen and progesterone in the body of a woman. These hormones are believed to have several health benefits for a woman, and help address some of the adverse symptoms arising out of menopause.